Franklin Morris Howarth was 29 years old when Life Magazine marked its tenth anniversary in 1893. The editors hosted a party at Sardi’s and all the major illustrators were there: Charles Dana Gibson, “Van,” A.B. Wenzell, “Chip.” Howarth, one of the youngest, also attended. He was yet to draw his most famous work for the Chicago Tribune and American Puck.

On an early January morning, Howarth set out for the dinner. He boarded a train in Buffalo after a weekend visit, knowing he would arrive hours early in Manhattan. He planned to spend his spare time sketching in Grand Central Depot. This was not the station of today; Howarth would not live to see it. (The white palace now on East 42nd Street has been there since 1913, a creation of the architects Carrere & Hastings and Stanford White.) 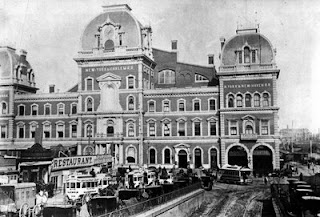 Grand Central Depot, in the public domain.
Tall, dark brick turrets marked the corners of Vanderbilt’s 1893 depot. A glass dome spanned the wide pedestrian walkways and alcoves. It was Vanderbilt’s pride and joy, the terminus of the New York Central Railway and the other smaller lines that the Commodore drew into his empire and from which he made his fortune. It was one of Howarth’s favorite places.

He found a seat in the grand waiting area on a polished wooden bench. All around him were women with small children, some sleeping, others crying. Several families were eating sandwiches out of a large sack; one young woman tipped her head back, eyes closed. She looked tired, thin, hungry. At least she was napping now. Perhaps she had worked all day as a typist or shop clerk. Howarth studied her face, her lips, her chin, her cheeks, and her curly dark brown hair. She stirred slightly, dreaming.

Howarth took a small white tablet and soft pencil from the pocket of his topcoat. It was cold, but the station was warmer than the streets. He began to draw the outline of the girl's face with loose strokes, shading a little here and there.

One of the children became fascinated by what Howarth was doing. He looked shyly over the artist’s shoulder. Deep in thought, Howarth didn’t even realize the boy was there until he said, “Hey, mister, whatcha doin’?” Howard said, “Sshhh! I’m drawing that lady, over there.” The boy asked why.

“She is very pretty. I like to draw people.” “Why don’t she wake up?” the boy pressed on. “I think she is very tired from working hard all day,” Howarth answered. “Do you think she is going home now?” the boy asked. “I don’t know,” replied Howarth. “Would you like to sit here while I finish my drawing?” “I have to ask my mama,” the boy replied, and ran off to the opposite bench. The woman looked over at Howarth suspiciously and forced the boy down on the bench next to her.

Howarth turned back to his drawing. The girl had moved her head slightly, throwing off the angle from which Howarth viewed her a few minutes ago. He erased a few lines and continued. Soon he had a complete drawing of the young woman’s head and neck. He started to put away the pad. She slept on. “Hey, mister,” the young boy whispered.

“What? ... Say, aren’t you supposed to be back there on the bench with your mother?”