Last night, I attended an interesting talk on the book Distracted by Maggie Jackson at the New York Society Library, a centuries-old institution on East 79th Street in Manhattan. Toward the end of the talk, a warm golden glow captivated me, shining out from the tall windows of the apartment house across the street. The lights of the Library bounced back, creating a nimbus around the window frames.

A vignette from long ago: Gaslight streams from windows in an expensive flat. The family sits down to dinner now that Father is home from business. The older children dine with their parents as servants bring the courses, one at a time. Mother is still young and beautiful, her hair in a Gibson. Night moves in. A baby cries, cranky and colicky. The meal continues as Mother becomes alarmed about the ferocity of the baby's cries. Then, silence -- the nursemaid must have calmed the fretful child. Mother speaks in a low voice about nothing much; father replies; the baby cries again, louder.

Now Father is restless, unnerved by the noise. The older children watch him and then turn to Mother as she rises from the table. "I'll go tend to Baby," mother says. "Perhaps she is feverish." Custard is served but Baby's cries become stronger. "Fetch Dr. Clark," Mother says as she rushes back into the room. "Fetch the doctor now." Father runs out the door as the older children sit still and silent. "Hurry," Mother says.

This evening, I searched for the perfect dessert for tomorrow's Oscar night party -- Feb. 22. Why did I find only one cherry pie but stacks of pumpkin at my local market? Is everyone celebrating Washington's birthday this year? Or are the bakers planning for an early Thanksgiving?

Come to think of it, I haven't seen one Oscar-nominated movie! I have indeed fallen behind the times.
Posted by M.A. Dering at 11:18 PM No comments:

A Riot of Snowdrops 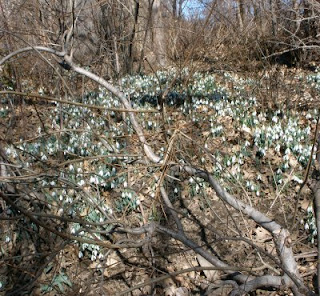 Found on a stroll through Central Park earlier this week. What a wonderful surprise! Photo: M.A. Dering.
Posted by M.A. Dering at 8:31 AM No comments:

If you're lost in Central Park, head for the nearest lamp post.

Chances are, it will look like one of these: The first pair of numbers indicates the closest cross-street; the last two digits are Park serial numbers.

The old lamp post on the left tells you that you're near 71st Street; the newer, less gracious, model on the right shows that you're closer to 72nd Street. With that in mind, you can find a landmark (skyscrapers, statues, ball fields), head west into the sunset, or follow the traffic on the foot path if it's rush hour. Odds are, you'll reach either Fifth Avenue or Central Park West and can move on from there. The Park is also full of good maps and helpful pedestrians, so don't be shy.

Here's a helpful landmark. He towers above the Park and can be seen from a distance. If you see Daniel Webster's face, you'll know you're pointed west toward 72nd Street. 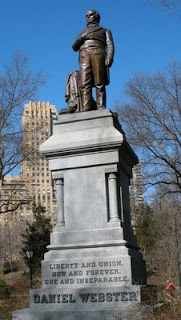 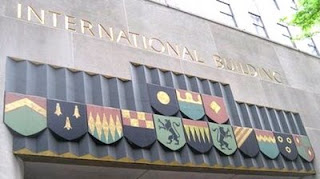 Here is the entire array of fourteen heraldic shields above the entrance to 20 West 51st Street. My thanks to John Shannon, Chairman of the Heraldry Committee, NYG&B, for this photo. See yesterday's post for the full story.
Posted by M.A. Dering at 5:59 PM 2 comments:

Last May, I led a walking tour of Rockefeller Center, focusing on its heraldry. In addition to the traditional (though subdued) English and French coats of arms, I found an intriguing heraldic grouping above the West 51st Street entrance to the International Building. Designed by Depression-era artist Lee Lawrie, fourteen shields had been originally designed to carry the arms of specific countries. However, along the way, Lawrie was instructed to make them more abstract and generalized: the colors were muted to fit the Art Deco palette of Rockefeller Center, the individual elements became starker, and none of the fourteen shields represented any country or family.

In her excellent book The Art of Rockefeller Center (New York: W.W. Norton, 2006), Christine Roussel explains: “The 20 West Fifty-first Street entrance required embellishment to maintain consistency with the rest of the Center, but to endow it with specific elements seemed too explicit and might limit the rental market.” The final rendering of the shields, completed in 1937, implied “history and internationalism without being explicitly devoted to one part of the world or any one country.” 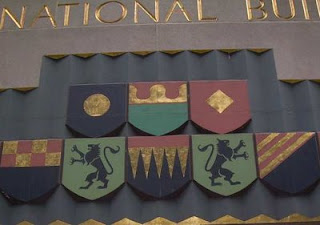 What do you think of these designs? If you’re new to the study of heraldry, you might find the following website interesting: Glossary of Heraldic Terms . In my opinion, the shields pictured here, courtesy of heraldist Paul Campbell, are the most compelling of the group. But see for yourself the next time you’re in Rockefeller Center.

P.S. My tour was co-sponsored by the Committee on Heraldry of the New York Genealogical & Biographical Society and the College of Arms Foundation, Inc. If you’d like information on heraldic activities in New York, post a comment below with your email address and we’ll return your message post-haste.
Posted by M.A. Dering at 4:23 PM No comments:

When I lived in Morningside Heights, I asked the landlord to paint my kitchen walls yellow. Bam! The paint was so bright that my roommates and I decided to tone it down by covering it up. We created a giant collage from wine bottle labels, all kinds, bright, dull, some with pictures of grapes or gorgeous sunlit landscapes. Some lured the eye with beautiful script while others were plain and square.

Once a month, we invited guests to a Sunday night dinner and asked them to bring wine. We carefully steamed off the labels, pasted them onto a giant piece of poster board, and remounted it on the wall next to the tall white metal cabinet. That collage was as beautiful as a japonaise box of costume jewelry I discovered when I was six.

Bright spots in a difficult world.
Posted by M.A. Dering at 11:08 PM No comments:

I will never, ever read the cards again. An old Bulgarian woman passed down the secret to her granddaughter, who taught it to me. For a while, it was fun -- love, money, promotions, inheritances -- no fortune was bad.

I agreed to read the cards again on a lovely spring night. A few friends and their friends stopped in for an after-dinner drink. We talked about summer vacations, parties on Long Island, where to get the best food. Then someone announced that I read cards. All right -- I did it once or twice, then called it quits. But, Manhattan being Manhattan, "no more" was not an answer. I dealt one more array, three rows of three ordinary playing cards, for a young woman. She was there with her fiance, a handsome young man standing near the door.

Take a breath. Last time tonight. I lit the pyramid candle, sat down on the floor, and dealt the cards. The young woman sat across from me, cross-legged, twisting a lock of hair. "Now clear your mind and watch as I turn up three more cards," I said. She obeyed. I told her a few frivolous things and then asked her to think of a question. "Something you'd like to know ... anything at all." The young woman closed her eyes. In an instant, the room grew larger, the door taller. I fell into dark water. "I'm so sorry that your parents are getting divorced," I said.

Utter silence. Utter sadness. We said good-night and everyone wandered into the April evening, a Pandora's box, blossoms on the wind but storm clouds on the horizon.
Posted by M.A. Dering at 6:55 PM No comments:

Every now and then, I collect a ghost story. This one is from the Upper West Side of Manhattan.

Thirty years ago, a newly-married woman -- let's call her Prim -- moved into a spanking new apartment building on the Upper West Side. Her study windows faced a much older building, the Dakota, a gem from the 1880s. The problem with the bright new building was that it had a very old, not-so-pleasant ghost.

Eating toast in her kitchen one morning, Prim smelled smoke. She ran into the living room where she saw the cut-crystal cigarette lighter shooting flames into the air. Prim ran to the coffee table, snapped the lighter shut, and opened the window. The faint sound of children playing calmed her down, and she continued on with her day.

The next afternoon, Prim heard her bicycle bell ringing. The bike was upended and stored in the hall closet, surrounded by the usual clutter. The tinkling stopped as soon as Prim opened the door. After that, the tiny bell would ring again and again, usually in the morning.

Finally, Prim decided to move. On her way to look for packing boxes, she stopped for coffee in a long-gone pastry shop. One of her friends asked what was wrong -- poor Prim must have looked spectral herself. She told her friend about the fire, the bell, and strange knocking sounds in the living room. "Time to move," she said. "My husband never hears these things, and he thinks I'm going crazy."

Her friend stared. "Wait a minute, don't you live near the Dakota?" "Why, yes," Prim replied. "You know that." "But you didn't tell me that you were so close!" "Uh, no, why would that matter?"

"Because, silly, your apartment must be on the spot where the playground was! I've heard about this before -- the children in the Dakota were very upset when they lost it."

"Maybe so," Prim answered, "but this child is beyond upset. He's getting malicious!"

"It's the little girl," the friend said. "She tripped and fell over some bricks and hit her head when the new building went up. I don't think she ever was the same afterwards. Her parents took her away, upstate, and I think she died in Syracuse."

"Probably wants to go out and play."

Her friend smiled. "You need to ask her, politely, to leave you alone. Perhaps she'll respond to kindness. Maybe you need to tell her that you didn't take her playground away."

Prim still lives in that building. Every now and then, she hears the faint sounds of children playing from somewhere deep in the alleyway between the buildings.
Posted by M.A. Dering at 11:44 AM 1 comment: