“A girl – your Madonna -- was stabbed near the East River last year. They took her to Bellevue, but she walked out of there and hasn’t been seen since. I can’t believe that she survived. But folks on Second Avenue say they’ve seen her every now and then. And you saw someone like her in the Depot this afternoon?”

“Yes, and again tonight. She asked me for money. I offered to drive her to the women’s home. But then I looked around and couldn’t find her.”

“A ghost with skin, with blood? I drew her – look!” Howarth took out a small sketch pad from his suit coat and showed the portrait to Silas. “Mmm ... that’s a beauty!” Silas whispered.

“Do you think she could have followed me from the Depot over to Sardi’s? Maybe she waited for me. God, Silas, I feel like a stupid chump. That girl was probably waiting for someone to roll me when I took out my change purse.”

“Well, maybe,” Silas replied. “But maybe you did see a ghost!”

Howarth laughed and yawned at the same time. “I need sleep! I’ve got to get back to work. Lots of deadlines ... Mind if I sleep here?”

Silas steered Howarth to the guest bedroom. Many hours later, Howarth work to the delicious smell of strong coffee, bacon, eggs, and toast. After wolfing down his breakfast, Howarth asked Silas, “So what do you think now, in the clear light of day?”

“Still the same, Frank. I think you saw a ghost.”

“Look at this," Howarth said, "It’s got to be the same girl! She asked for my help -- she disappeared. She knew the Depot from her trips to Croton. No where to go ... no one here.”

“Perhaps she was already dead,” Silas murmured, “But, look, you have that sketch.”

Howarth took out the sketch again, made a note on the back, and wrote down the details of her short life. Sophia Randolph. A nice name, Howarth thought, a gentle name. A runaway from Croton, up the glistening river. A fallen girl. An angel.

In a few hours, Howarth headed home, thinking of the dinner, thinking of Sophia. Not someone who would ever be drawn by Gibson now. She needed F.M’s coins for her trip to the East River. She was much too tired to walk. 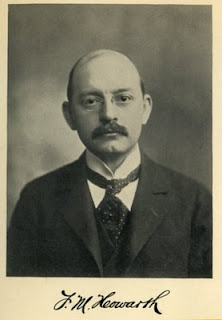 Photo courtesy of Floyd Smith Sanford, III
Franklin Morris Howarth drew cartoons for Lippincott’s, Life, American Puck, The Hearst Syndicate (most notably, the Chicago Tribune). He died of pneumonia at the age of 44. He left two daughters and a widow in Philadelphia.

Howarth’s cartoons are in the collections of the New-York Historical Society in their original editions, collected in bound volumes. The menu of the Sardi's dinner still exists, but Howarth would not want me to tell you where it is.

Who was the inquisitive boy who captured Howarth’s attention in Grand Central Depot? Will we ever know? He was mischievous, rebellious, and didn’t care much for grammar. But if he ever saw Howarth’s published cartoons, perhaps he remembered the man in the Depot who drew the portrait of an angel.
Posted by M.A. Dering at 12:22 PM No comments: